Twitter can be a powerful tool to build relationships and directly interact with stakeholders.  Unfortunately, one wrong move can be devastating. Misguided humor is sometimes the culprit as with a recent tweet from the Federal Student Aid branch of the U.S. Department of Education.

Usually, humor tends to be politically insensitive, but rarely mocking and offending their own customers and stakeholders. Unfortunately, someone @FAFSA made a bad judgment. They attempted to make a joke out of being poor. Not cool. This tweet reached thousands of people and had many replies, most of which called them out for their bad mistake.

The tweet was eventually deleted -- after being up for over an hour. Hopefully, the folks behind the account can make a public apology for the egregious error. This simply was not funny nor productive. And it offends not only the millions of students who need financial aid to attend college, but the financial aid administrators who help those students. 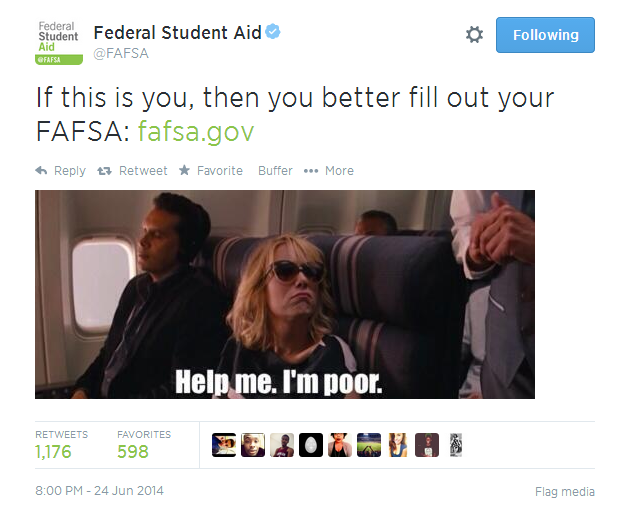 The FAFSA twitter account has since apologized for the above tweet (see below). Liz Gross, a social media strategist, makes a good point on her blog, regarding the backlash. While it was a mistake and should be getting attention, it's important to note that they publicly apologized and the good they've been doing with social media far outweighs this error.

We apologize for the insensitivity of our previous tweet. Our goal is to make college a reality for all. We're very sorry.
— Federal Student Aid (@FAFSA) June 25, 2014